Hi everyone – as promised I’m back with a new deck article – I skipped the set 6.1 metagame, but now that set 6 is complete it’s time to wrap up the meta.

So what’s the biggest difference to set 6.0?

First of all with set 6.1 we got some really powerful mono faction tools in the form of the Patron cycle. Especially Patron of Tarsus and Patron of Deepwood had quite some impact on the metagame and made some archetypes viable (again). The Tempys Patron of Kadras is alright in a deck that tries to set up big turns with Rage of Kadras, but overall the deck is a little to dependent on rage so that similar AT variants remain stronger. The Alloyin Patron of Anvillon suffers mostly from its bad stats and on top he’s hard level gated, which makes him close to unplayable.

The big elephant in the house – released with set 6.1 – is certainly Ice Grasp. While it doesn’t look amazing on paper this card can easily wreck complete havoc in the right deck. Especially when played early this card can deal an insane amount of damage. 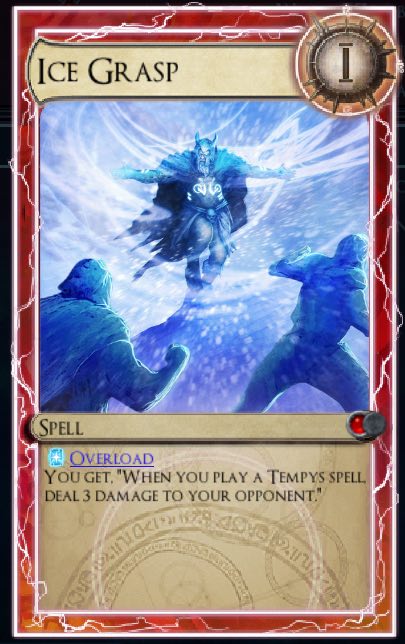 Just to give you an example of the best case scenario. Played on turn 1.1 and given you see an average of 2 Static Shocks in PL1, you will be able to play a total of 6 + 2 (Static Shock) spells going first and thus dealing 24 damage in PL1 alone from one Ice Gasp. That is insane for a lvl1 spell, even if it doesn’t affect the board. In set 6.1 (which I really hated, just because of this card), the game was often accelerated to the point were games would often end on between turn 2.1-2.3 and some decks (especially AT, which had no access to lifegain or Aetherphage) were nearly unplayable, because they would basically automatically lose against this deck. I believe that as a core element Solforge should be about creature battle and gaining incremental advantage and not racing your

opponent down in the first few turns, so I stopped playing for a while.

Now with set 6.2 we finally got a counter to Ice Grasp in the form of Wipe Clean. This is a quite some boost to Alloyin decks , since it’s not only helpful against permanent player effects, but it does also affect the board enough that it can be useful against a wide range of decks. On top of that you can use it to remove negative effects like defender from your own creatures.

The other cards from the Ice Grasp cycle – Enduring Vitality, Nexus Bubble and Infernal Ritual – saw some play in set 6.1, but are now not really playable anymore with quite a lot of decks running Wipe Clean.

I hope this sums up the biggest changes quite well, so lets move on to the decklists.

As I said before this deck can wreck havoc on any archetype that is slow and does not run any counters to this deck. This deck simply plays Ice Grasp and plays Tempys spells until your opponent is dead. As a necessary evil this deck runs Ambriel’s Edict along with some creatures to clear the board.

Best counters to this deck are Aetherphage, Wipe Clean and Crypt Conjurer (along with Bron Wild Tamer, which can race this deck and is very sticky).

This archetype tries to abuse the interaction between Alyssa Strifeborn and Trial by Combat, a new set 6.2 legendary. When Trial by Combat doesn’t kill Alyssa, she will get stronger while usually remove a creature. This can get out of hand very quickly with a lvl2 Alyssa, since Alyssa has 14 Health and will get a buff of 1 health and 2 attack per point of damage that Alyssa receives from Trial by Combat. E.g. your 4/14 Alyssa lvl2 will get a 24/24 if you use Trial by combat on a 10 attack creature. My version is not really all in on Alyssa, since I like the traditional AT Goodstuff playstyle quite a bit.

Key to this deck is certainly Marty McGear, which is played along with 2 value robots – War Machine and Forgewatch Sentry. With the buff that War Machine provides to all your creatures this deck can race AT burn, while removing Ice Grasps with Wipe Clean. Immortal Echoes is another source of creating multiple threats from one card. There is also a version of this deck with Crypt Conjurer, which is more Nekrium spell heavy, but since I cover other Nekrium drain lists I opted for this list.

I think this deck is one of the strongest archetypes in the current meta, since it has great options against grow wide decks (Patron of Tarsus, Epidemic), it utilizes Duskmaw against grow big decks and has access to either Wipe Clean or Aetherphage against AT Burn. On top of that this deck only needs 5 legends (3 Duskmaw, 2 Immortal Echoes) in its core and 3 of them are easily accessible by the Onyxium Twilight starter deck. Replacements for Xerxes and Soul Reap could be Scythe of Chiron and Bitterfrost Totem.

The Dinosaur archetype is simple straightforward and quite powerful against a wide range of decks. Especially against decks that don’t run Oreian Justicar, Leyline Sentry or Herald of Destruction this deck can often trample your opponent down with Bron, Wild Tamer and his Dino Knight. This archetype is also quite simple to play – I can definitely recommend it to new players.

Some decks never die it seems… Pion found a wonderful way to bring back the HeraldBomb archetype, even with the 2 nerfs it got with the release of set 6. He wrote a nice article about the deck on reddit: Pion’s HeraldBomb List to fight the current meta.

I think Zombies are still quite a viable archetype, but I haven’t played with the deck lately and didn’t see it performing to well in tournaments. If you have a good list, I would be more than happy to post it here.

I experimented quite a bit with a AU defender deck that uses the new Rubyscale Dragon, but I wouldn’t call that a meta deck.

Leave a Reply to Josh The Intern Cancel reply