Updated Dec. 20 with results from the Golden Gauntlet
I’m back with a new article about the Set 6.3 metagame (my nickname for the first phase of the Rebalance). I was somewhat reluctant to write an article since I expect bigger balance changes soon, but I still wanted to show players decklists that they can use during their Christmas holidays 🙂

So let’s talk about the changes/cards that have the biggest impact on the current metagame.

First of all we have Dozer, The Dormant. He was sleeping during most metas, but with a huge buff to his lvl1 he is now the “OP” card in this meta. Aggressive and Breakthrough is already scary, but as a 10/10 in his lvl1 form he generates a 2-for-1 most of the time while dealing ~10-15 damage in the process. On top of that his sleeping form is nearly unkillable by any form of PL1 spell damage (Blood Boil and Thunderstomp) or by creatures without buffs (only Shardplate Behemoth). Even some AU leveling variants run him and activate him with Malice Hermit (just because of his insane lvl1 body).

Immortal Echoes is now more played than ever. Since most creatures have gotten the Forge keyword you could think that Immortal Echoes got an indirect nerf. This is not the case because at the same time lots of creatures received a lvl1 stat buff and on top of that two of the hate cards against it – Leyline Sentry and Herald of Destruction – were nerfed. So one of the first things that people figured out is that the combination of Dozer (and other big creatures) with Immortal Echoes can generate so much value that it’s nearly impossible to come back from a good start of that deck.

Another very powerful card is Lifeblood Dryad. Now that her lvl1 ability buffs twice as much as before, there have been numerous grow-wide variants that utilize her. It’s kind of like Zombie Dreadknight, but it affects your whole board, your creatures don’t need regeneration and it’s a 7/7 instead of a 7/5 in PL1. Of course you need four creatures on the board for her Forge effect to trigger, but especially robots got a few buffs (Esperian Scarab and Arcflight Squadron) so it’s much easier to get a full board with the right deck.

Windspark Elemental is also more powerful than ever before, because of its synergy with Firestorm and Wildfire Maiden. I had games where my opponent only had a lvl1 Wildfire Maiden starting his turn and he played lvl1 Scythe of Chiron to buff Wildfire Maiden to 14 attack and used Windspark Elemental to wipe my entire board while dealing 6×14 = 84 damage to me (see NT Windspark). Even with just Firestorm against a full board you can deal 25 damage while killing some of your opponents creatures o.O 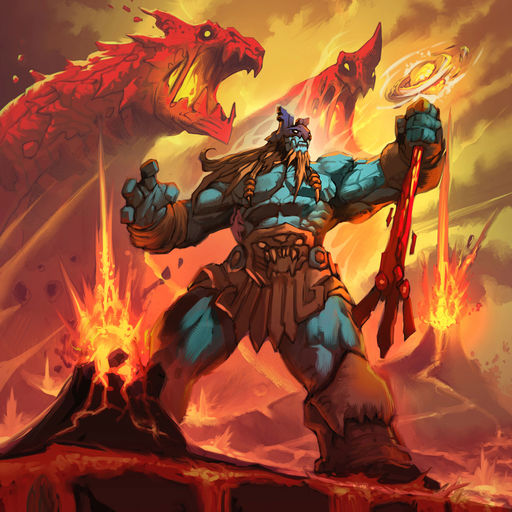 Ignir, Khan of Ashur is now not only played in AT anymore, but with the buff to his lvl2 and lvl3 he is being played in most Windspark decks as well as in all kinds of NT decks. Ignir is basically a bomb that is not only solid on all levels, but his lvl3 has the ability to end games, since it deals 14-28 damage to your opponent (28 guaranteed with Windspark Elemental) and I don’t think I even have to talk about the lvl4…

Top 4 Decks and State of the Meta

UN Mono Dozer, AU Control, AU GrowBots and AT/NT Burn are probably among the best decks in the meta. This 4 deck archetypes kind of build the meta and I posted several decks for each archetype. So roughly the chase is like this:

This is of course just a rough picture and not all decks fit into that scheme, but I think you get the idea. Initially everyone was just playing aggro Dozer variants, but when everyone was sick of mirrors all day long some other archetypes emerged that are very playable (although in my opinion UN Dozer remains at the top). In the beginning it looked like Control would beat Burn decks most of the time, but this changed with more refined Burn decks emerging. As you can see Burn decks target two archetypes right now, which is one of the reasons why Burn decks won the recent Golden Gauntlet.

Ice Grasp (and Steelscale Dragon) got quite a nerf, but the AT Burn deck is still playable. It loses to Aggro and NU Grow Wide variants, but it’s very solid against control decks and AU Grow Wide.

I had another NT Windspark version here first, but this one here transitions better into the lategame with threats like Ignir and Zarox (it did really well in the most recent Golden Gauntlet). As mentioned above this deck can have some incredible damage output, when you get the Windspark and Wildfire Maiden combo going.

Here we use the full package of Dozer, Static Shock, Wildfire Maiden and Windspark. This deck is definitely aggressive enough to beat control and grow wide, but loses to other aggressive decks (e.g. UN Dozer) or against decks with lots of removal options (NT). One variant of this deck plays Lightning Spark and Flamebreak Invoker over Wildfire Maiden and Lysian Shard.

This is a grow wide variant that is really good against control decks, since it has so many sticky creatures (Progeny of Xith, Spiritstone Sentry and Immortal Echoes). I have seen NU variants of this deck that replace 2 Varna’s Pact and 3 Borean Windweaver with 3 Lifeblood Dryad and 2 Nefrax, the Soulweaver.

This deck tries to swarm the board and then overwhelm your opponent with board wide buffs. It can be really good against Control (strongly depends on when they draw Ambriel’s Edict) and Aggro, but often loses to Windspark decks due to the lack of direct removal. This deck can be tuned to beat the Dozer decks, but this version is better against control match-ups and for the mirror.

This is probably the most played control variant with card draw right now. You basically level your Bombs and your draw engine and have a very consistent and powerful late game. Loses to some aggro variants, but definitely not all of them. There are also many variants of this deck.

This deck is actually quite greedy and definitely weaker than the AU Control deck (at least in this meta), but it’s definitely a lot of fun and promises exciting RNG moments with Ignir. You will find a version without the Ironmind Acolyte draw engine here: solforgegame.com/news/zans-crazy-deck-shop-episode-21-just-wait.

I really like the idea behind this deck and that’s more or less the reason why I wanted to feature this list (not because it’s meta defining or hyper competitive). If you don’t know what “Draw, Go” means you should read http://magic.wizards.com/en/articles/archive/avalanche-card-advantage-2003-03-21. The main idea is that you try to aim for 1-for-1 trades with removal while setting up your draw engine. With Immortal Echoes basically generating a 2-for-1 against this deck all the time you will probably notice why it’s not the right meta for this deck, but I could see it being pretty good with a shift of the meta. For a more competitive AN version you should check out Stautmeister AN Draintank list: a1sf.blogspot.nl/2015/12/deck-primer-draintank.html.

This deck is a quite straightforward aggressive dinosaur list. With the help of Ator, Call The Lightning and the Umbruk dinosaurs you can overwhelm your opponent very fast. Against control decks you can sometimes win on 2.1-2.2. You can find more variants of this deck with budget options at solforgegame.com/news/zans-crazy-deck-shop-episode-22-philosoraptors.

This deck might not be the most aggressive list, but it combines two very powerful card engines – mono Nekrium with Crypt Conjurer, Duskmaw and Patron of Tarsus and Scourge Hydra, Dozer and Immortal Echoes. It also has the removal suite to deal with late-game threats like Chrogias lvl3 (which is usually an auto-loss for other aggressive decks) and has the ability to close games with Crypt Conjurer, Nekrium spells and Explosive Demise. This deck has already won 2 SolForgeLadder tournaments and the author has written a small article about it: solforgegame.com/forum/strategy-discussion/the-new-xerxes.

There are several variants of UN BDA (Big Dumb Animal) lists out there and I wanted to feature this one, since it has existed before and is still really good. Your aim is to either get a Dozer or a Dino Knight into your graveyard early and then cycle them with Immortal Echoes! So it’s definitely not a bad move to use a Mosstodon with Bron on turn 1 (especially if you didn’t draw any Echoes). Also not that Mosstodon’s ability still triggers when being revived by Immortal Echoes.

I wanted to feature one AT aggressive list and I think robots is the way to go. Ator helps you to generate/play more robots with Marty and Arcflight, while you can use H.E.R.M.E.S. to protect your robots on your opponent’s turn. I haven’t played enough with this list, but it definitely has taken a hit from the last meta were it was still possible to buff your whole board with Marty and War Machine. On the plus side you can play War Machine for free with Arcflight Squadron and both got a significant buff.

This deck is more mid-range than aggressive, but since it’s very popular at the moment I didn’t just want to put it under notable mentions. This list is overall really solid and doesn’t have lots of weaknesses. Grow-wide can be problematic if they go off early and it’s hard to make a comeback once you are behind, but apart from that every matchup seems winnable. To make for the mentioned weakness of this deck I actually opted to go for two Brimstone Tyrant instead of more single target removal.